Mr. Cormier wanted to change the world by helping others and transforming his industry. 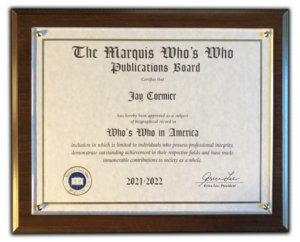 LAGUNA HILLS, CA, April 21, 2021 /24-7PressRelease/ — Jay Cormier has been inducted into Marquis Who’s Who. As in all Marquis Who’s Who biographical volumes, individuals profiled are selected on the basis of current reference value. Factors such as position, noteworthy accomplishments, visibility, and prominence in a field are all taken into account during the selection process.

After his grandmother suffered from age-related macular degeneration, Mr. Cormier decided to find a way to utilize his background in technology to help people like her. He earned a Bachelor of Science in Electrical Engineering from Worcester Polytechnic Institute and a Master of Business Administration in strategy and finance from Northeastern University. He later worked as the senior vice president and general manager of high performance analog at Mindspeed. In his career, Mr. Cormier has also held such positions as the vice president of optical communications and products at Sierra Monolithics, the vice president and general manager of energy measurement and communications at Teridian, as well as strategic advisor for Jariet.

In 2016, Mr. Cormier founded Eyedaptic, for which he currently serves as chief executive officer, alongside a number of technologists and retina specialists with backgrounds in technology. With Eyedaptic, he provides patented augmented reality visual aids for macular degeneration and other retinal diseases. In order to develop the company, he has built strategic partnerships with augmented reality vendors as well as low vision aid providers in order to ensure seamless integration for complete customer solutions. In his career, Mr. Cormier has developed skills in marketing, sales, engineering, operations, strategic partnerships, business development and new product strategy and execution.

For his exceptional efforts as a technology professional, Mr. Cormier was presented with the Audience Choice Award for Embedded Vision Technology, the Innovator of the Year Award from Orange County Business Journal and the High-Tech Company Award. He was also recognized as a finalist in the San Diego Tech Coast Angels Group Quick Pitch Competition. Outside of his professional endeavors, he has given back as a mentor at the University of California Irvine Merage School of Business and is also active with the Technical Advisory Network at Worcester Polytechnic Institute.

Eyedaptic is a Semi Finalist in San Diego Angel Conference

On July 20 at the Four Seasons Vancouver, Jay Cormier, President & CEO of Eyedaptic…

The most recent episode of Assistive Technology Update, featuring an interview with Jay Cormier –…

Learn how you or your loved one can finally see what they've been missing.
Contact Us
© EYEDAPTIC INC. 2022. ALL RIGHTS RESERVED
Back To Top Skip to content