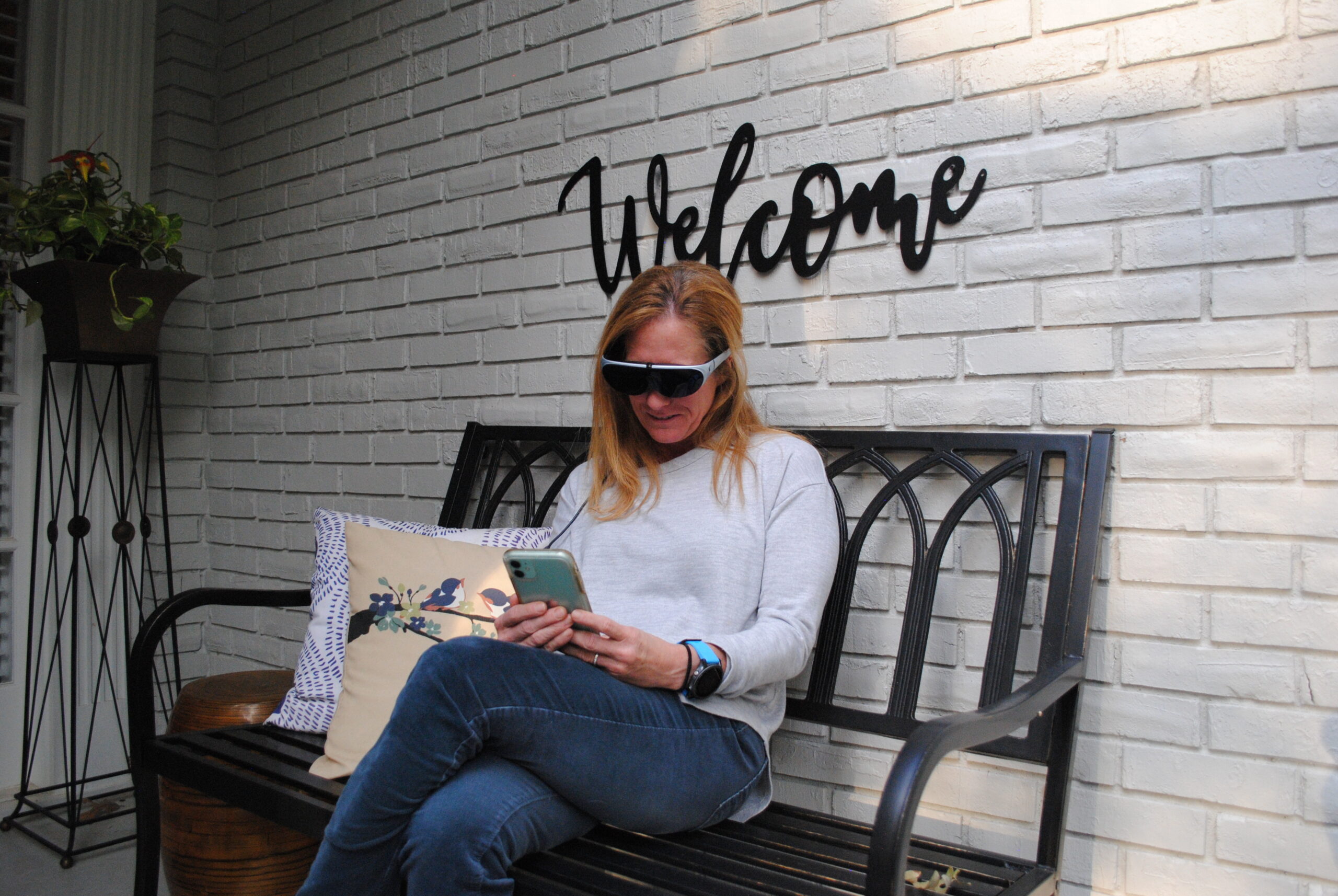 When Elizabeth Baker was first introduced to vision-enhancing wearables, she knew they weren’t for her. The idea of wearing bulky glasses while having to be tethered to an object wasn’t the solution she was looking for.

In place of wearables or assistive technology, she got by using a donated closed-circuit TV and the magnification feature on her phone. When those tools were no longer cutting it, she found Eyedaptic, specifically the EYE3 model, at her local clinic.

“I tried them on and I knew immediately these were the ones I’d use,” Baker said.

Less cumbersome and more high-tech than other wearables, Elizabeth first started using the EYE3 glasses when they were introduced to the public. “They were just easy,” she said.

Fast-forward to 2022, Elizabeth upgraded to the all-new EYE5 pair. So far, so good. “The EYE5 is much more user-friendly,” said Baker.

Diagnosed as a teenager with Juvenile Macular degeneration or Stargardt’s Disease, a rare genetic eye disease that happens when fatty material builds up on the macula — the small part of the retina needed for sharp, central vision, causing central vision loss. Central vision loss wasn’t the end of Elizabeth Baker’s story.

After graduating from college, she enrolled at the Medical College of Georgia, where she got her Master of Physical Therapy. While studying in Augusta, her PT classmates got her into running. Once Baker earned her master’s degree, she moved to Chattanooga, Tennessee, and then decided to get into triathlons. There was a lack of information available for visually impaired triathletes, so Baker hung up the bike and goggles, took some time off to focus on her family, but later hit the ground running turning to half marathons.

Half marathons eventually turned into marathons and then evolved into Ironman events. With the opportunity to compete with a guide, Baker ended up having one of the fastest times for a visually impaired athlete at the 2015 Ironman in Chattanooga. It was then that she learned Paratriathlons were making their debut in the 2016 Paralympic Games, where she decided to go for it and start training. Baker calls finishing fourth and representing the U.S. in the debut of Paratriathlon at the 2016 Paralympic Games in Rio de Janeiro the proudest moment of her athletic career. Baker’s résumé includes medaling seven times at the World Paratriathalon Event (2 golds, 5 silvers) and two medals at the World Triathalon Para Cup (1 gold, 1 silver).

Today, Elizabeth lives a full life with a career and her family, aided by Eyedaptic technology. Whether it’s enjoying the sight of her children playing in their soccer games or the ability to accurately record a patient’s joint angles from the goniometer, it’s safe to say the EYE5 has become a part of Elizabeth’s life.

Eyedaptic is a privately held company that develops visual aid software, enabled by augmented reality hardware, for macular degeneration and other retinal diseases. The software goes beyond magnification to enable a fuller field of vision, and simulates natural vision for those suffering from central vision disorders such as AMD (age-related macular degeneration), to revitalize their quality of life.

Mr. Cormier wanted to change the world by helping others and transforming his industry. LAGUNA…

Learn how you or your loved one can finally see what they've been missing.
Contact Us
© EYEDAPTIC INC. 2023. ALL RIGHTS RESERVED
Back To Top Skip to content